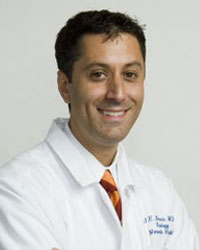 Dr. Bernie is certified by the American Board of Urology

Dr. Bernie attended the University of Pennsylvania and received degrees from both The Wharton School and the College of Arts and Sciences. He completed his medical degree at Case Western Reserve University in Cleveland, Ohio. He then completed two years of surgical residency, followed by four years of urologic surgery residency at the University of California, San Diego Medical Center.

Dr. Bernie then completed a one-year fellowship at The Indiana University School of Medicine where he developed expertise in Laparoscopic and Robotic Surgery. He has been the Director of Robotic Surgery at Norwalk Hospital since 2008.

Dr. Bernie has published extensively in all aspects of urology and has received several awards for both his surgical skills and clinical research.

See our reviews on Google