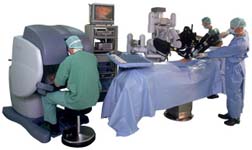 The InSite® Vision System which provides the surgeon with a true minimally invasive 3-D view of the surgical field.

The Surgeon Console which contains the master controls that the surgeon uses to manipulate the EndoWrist® Instruments.

What are the benefits of using the da Vinci® Surgical System?

For the surgeon, the ability to perform complex minimally invasive procedures as if they were performing open surgery procedures without the fatigue experienced in a long procedure. For the patient, numerous benefits common in existing laparoscopic procedures including reduced bleeding, less pain, smaller risk of internal scarring, shorter hospital stay and faster recovery are possible.

Reproduce exact movements of the human hand, wrists and fingers.

The only system with true 3-D vision offers depth of field and resolution. 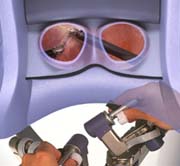 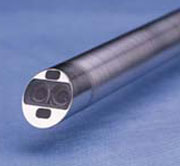 The da Vinci® Surgical System can be used for a wide variety of surgical procedures within multiple specialties.

With its 3-D view, the da Vinci® Surgical System aids the surgeon in more easily identifying vital anatomy such as the delicate nerves surrounding the prostate. The EndoWrist® Instruments provide the surgeon with dexterity not available using conventional laparoscopic instruments to perform a delicate and precise surgical dissection and reconstruction of the bladder and urethra.

The da Vinci® Surgical System enhances the advantages of laparoscopic surgery, which are:

The da Vinci® Surgical System will enable a minimally invasive alternative to open surgery! The da Vinci® System is the only operative robotic system cleared for Radical Prostatectomy procedure.

The American Cancer Society estimates there are 180,000 - 2,000,000 newly diagnosed cases of prostate cancer annually. Prostate cancer is the second leading cause of cancer death in men in the United States with approximately 40,000 men dying of it each year. Prostate removal is the most common procedure performed on men with prostate cancer and is typically performed through large, open surgical incisions, which often result in lengthy and uncomfortable patient recovery. There is a significant risk of impotence and incontinence with prostatectomies.

Other urologic robotic surgeries performed by the da Vinci® Surgical System are: